Seal carcasses expected to wash up in large numbers

With the annual Cape fur seal breeding season fast approaching members of the public can once again expect to encounter dead seals on the beach, especially new born pups. Following from stranding research during last season (November 2018 – January 2019) there were over 250 carcasses that washed ashore on Plett beaches, mainly between robberg 5 and wreck beach. It is important to remember that high mortality levels in adults and pups during the breeding season is a natural occurrence at any seal colony. At Robberg the high pup mortality is believed to be the result of the peninsula’s exposed easterly terrain and the effect of challenging environmental conditions on early pup survival rates. Pups are born with a black coat not yet insulated for survival in cold ocean water. They spend the first 3 months of their lives on land while suckling milk from their mothers who take care of them between short foraging trips to sea. Due to the lack of shade at the breeding site and being blocked-off from cool south-westerly winds, pups often have to cool themselves down in rock pools close to the water’s edge. On their way down many stumble over steep cliffs and end up in the ocean while others are knocked off the rocks by big easterly swells. Those that can’t make it back up either drown from exhaustion or hypothermia, many of whom wash up dead a few days (or even weeks) later on Robberg beach. According to boat-based pup counts at least a third of all pups born on Robberg Peninsula last season died this way. You can help us monitor seal mortality and collect samples for research by reporting any carcasses to the Plett Stranding Network (079 463 4837). The network also consists of members from municipal authorities at Beach Control (044 501 3125) who arrange carcass disposal. In case you come across a live pup on the beach the stranding network can assist with arranging transport to Tenikwa Wildlife Rehab Centre for short-term treatment before being returned back to the colony. 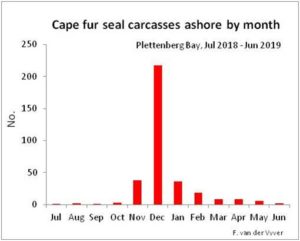