Supported by the Port Elizabeth Museum, Oceana, DEFF and the ORCA Foundation, marine biologist Frikkie van der Vyver recently returned from a month-long fieldtrip onboard the Desert Diamond, the largest fishing vessel and only dedicated midwater trawler in the South African fishing fleet. Targeting horse mackerel or ‘maasbanker’ (one of the main prey species of Robberg seals) roughly 80km off the Tsitsikamma coastline, the vessel is known to experience high levels of operational interactions with Cape fur seals and large pelagic sharks. Using the vessel as a research platform Frikkie managed to collect valuable information and samples from over 100 bycatch seals. The data will go a long way towards updating the nature and extent of seal-fisheries interactions off our coast, in particular new research on potential specialist behaviour in Cape fur seals that attend trawling operations – especially adult males which made up >95% of all seal bycatch during the trip. While onboard, Frikkie found it encouraging to see ongoing experimentation with a large bycatch exclusion device, the deployment of bird-scaring lines and full coverage of bycatch of large pelagic sharks, sunfish and non-target fish species by two Cap Marine observers. In addition, an onboard fishmeal processing plant eliminates the need to discard any bycatch of unwanted squid and fish species, further limiting the vessel’s impact on seabird and seal scavenging behaviour. During the course of the trip numerous vessels from the demersal hake trawl, tuna longline and south coast rocklobster longline sectors were also active in the area, confirming the rich diversity of commercial marine species being harvested on the eastern Agulhas Bank.

A selection of photographs taken during the trip: 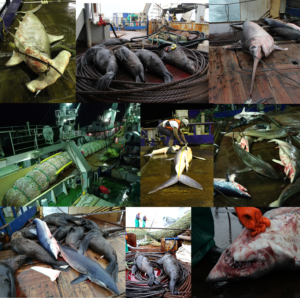